Slumber the Sea is a turn-based, combat RPG . Play as 3 aspiring dreamers as they fight against nightmare monsters in a fantastical, shared dream! The twist? Every party member offers a unique resource and playstyle based on different types of JRPGs! Play in frantic and dynamic battles with tons of surprising and strategic teamwork combos using each characters' unique abilities! Will you be able to master your dream career and escape this underwater dream world?

To begin, each party member takes turns attacking by clicking on their Skill Buttons. Some Skills are unusable until the necessary resource is required!  You don't have to attack in order, though! You can switch party members at any time, as long as they haven't moved yet. Strategize your turn order to come up with different team combos!

Attacks can inflict status effects or debuffs, and support skills can heal or provide buffs! There are plenty of other skills that do more than just that - but explaining them here would ruin the fun :)

Generally, only one Status Effect can be applied at once, but can stack with Buffs and Debuffs. Each of these are inflicted for 3 turns maximum.

Burn: Inflicts damage after every turn.

Paralyze: Chance of having your turn skipped.

Defeat the three Nightmares in each scene to progress to the next level! Each of the 3 party members has their own HP bar, and if they reach 0, they are downed for 3 turns, and then revive with half HP. If all 3 members die, it's game over!

The core gameplay of Slumber the Sea involves the usage and conversion of status effects into resources. Every party member in the game has a unique resource, which they can only obtain through setting up teamwork combos!

For example, The Chef requires a Spicy Ingredient to perform a unique support skill, but she does not start with any. To obtain one, The Chemist must inflict an enemy with a Burn status effect, and then The Chef can Harvest that status effect to gain the ingredient.

There are plenty of interactions to explore between members. Check out the diagram below for a basic overview of member interaction! 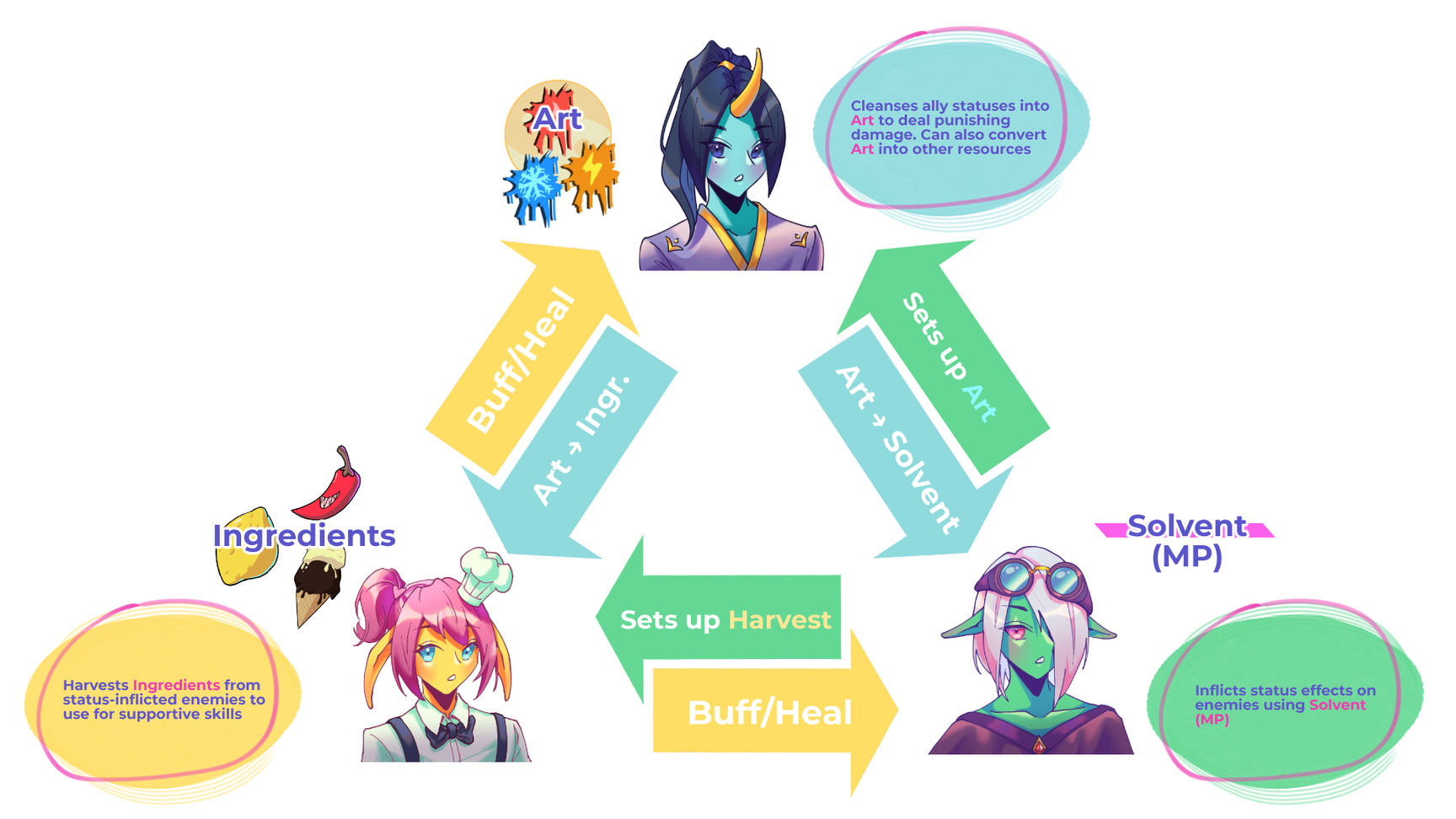 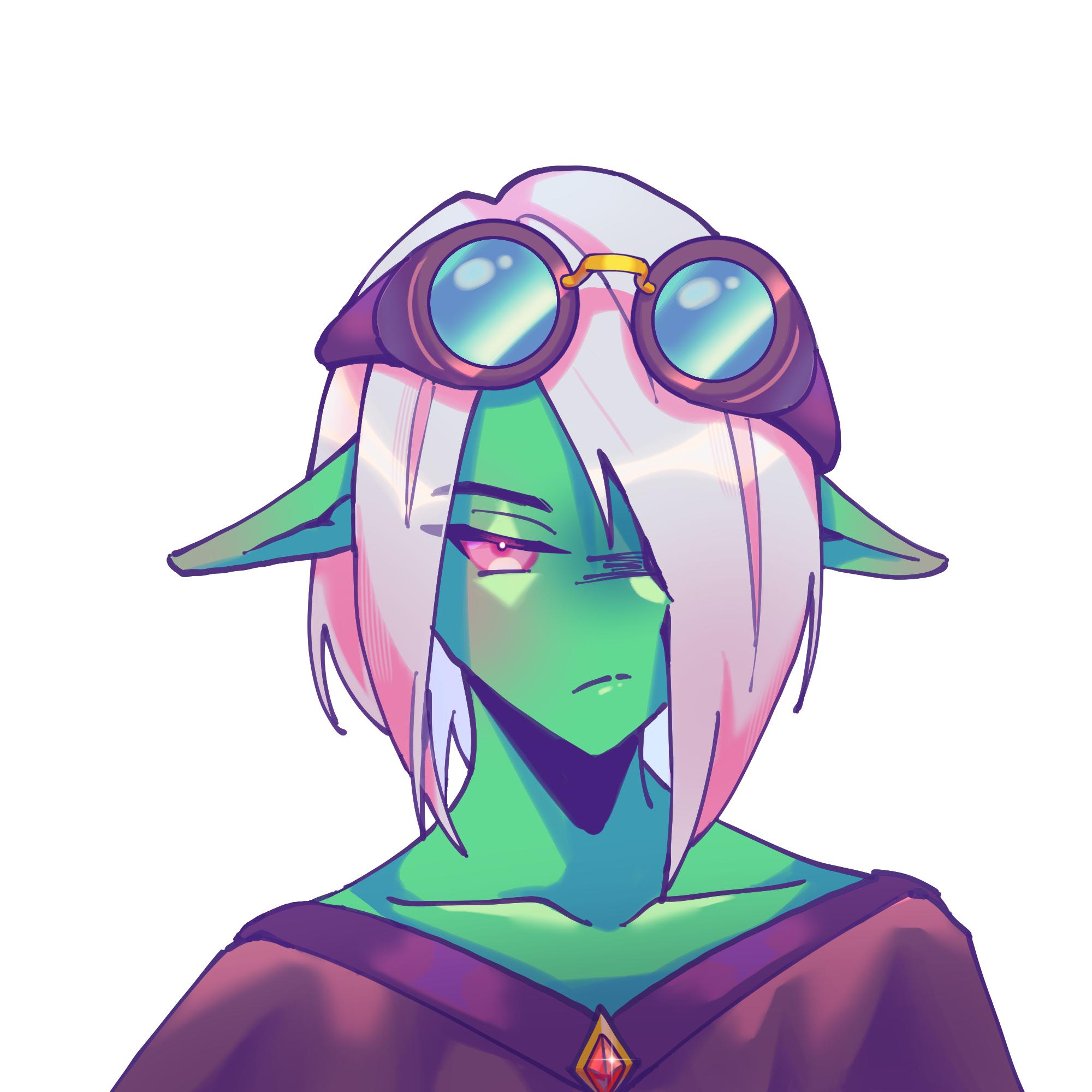 The Chemist is - fittingly - pretty toxic. With clever usage of his potions , which cost his Solvent meter, he can inflict status effects to punish enemies and set up for other combos. The Chemist may be fairly straightforward in his gameplan  - but don't sleep on his mischievous status set-ups.

His special ability is Infusion. When low on Solvent, The Chemist may opt to mix some Solvent for himself, effectively reloading his own meter! 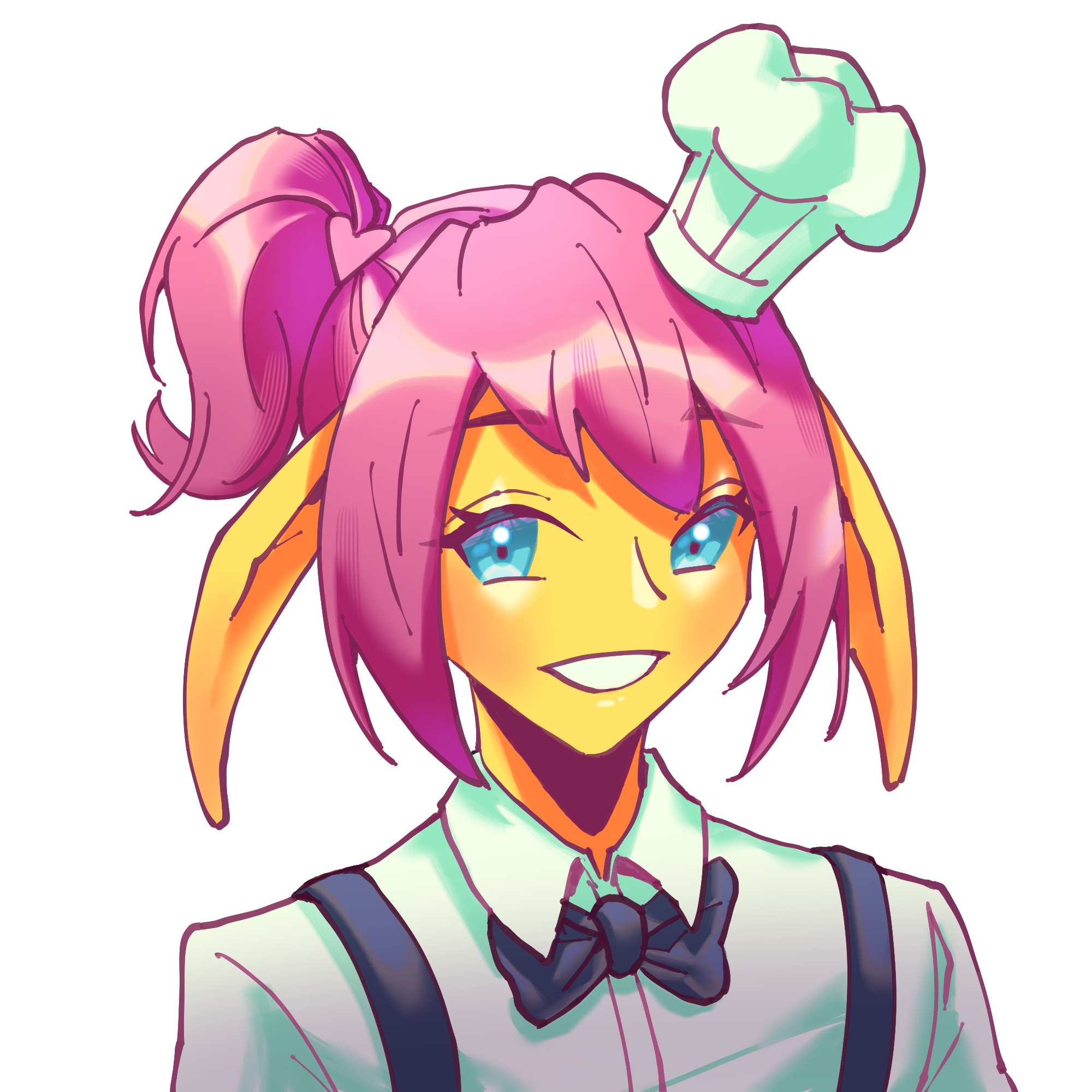 The Chef is an energetic, bubbly dreamer with culinary skills like no other! She is the Support unit of the party, using her Ingredients to craft support skills like Chili Inferno and Sweet Treat that raise attack, defense, and heal members. To obtain those ingredients, however, she must Harvest them from status-inflicted enemies! Try inflicting different statuses for different types of ingredients! She can also use Stew to duplicate ingredients she already has to stockpile her hard-earned harvest.

Her special ability is called Feast Mode. By pressing Left Shift or clicking on the big button to the left of her, you can toggle Feast Mode! When Feast Mode is active (icon is not greyed out), The Chef can use double the amount of required ingredients to cook powered-up versions of her normal cooking skills! Try using them all 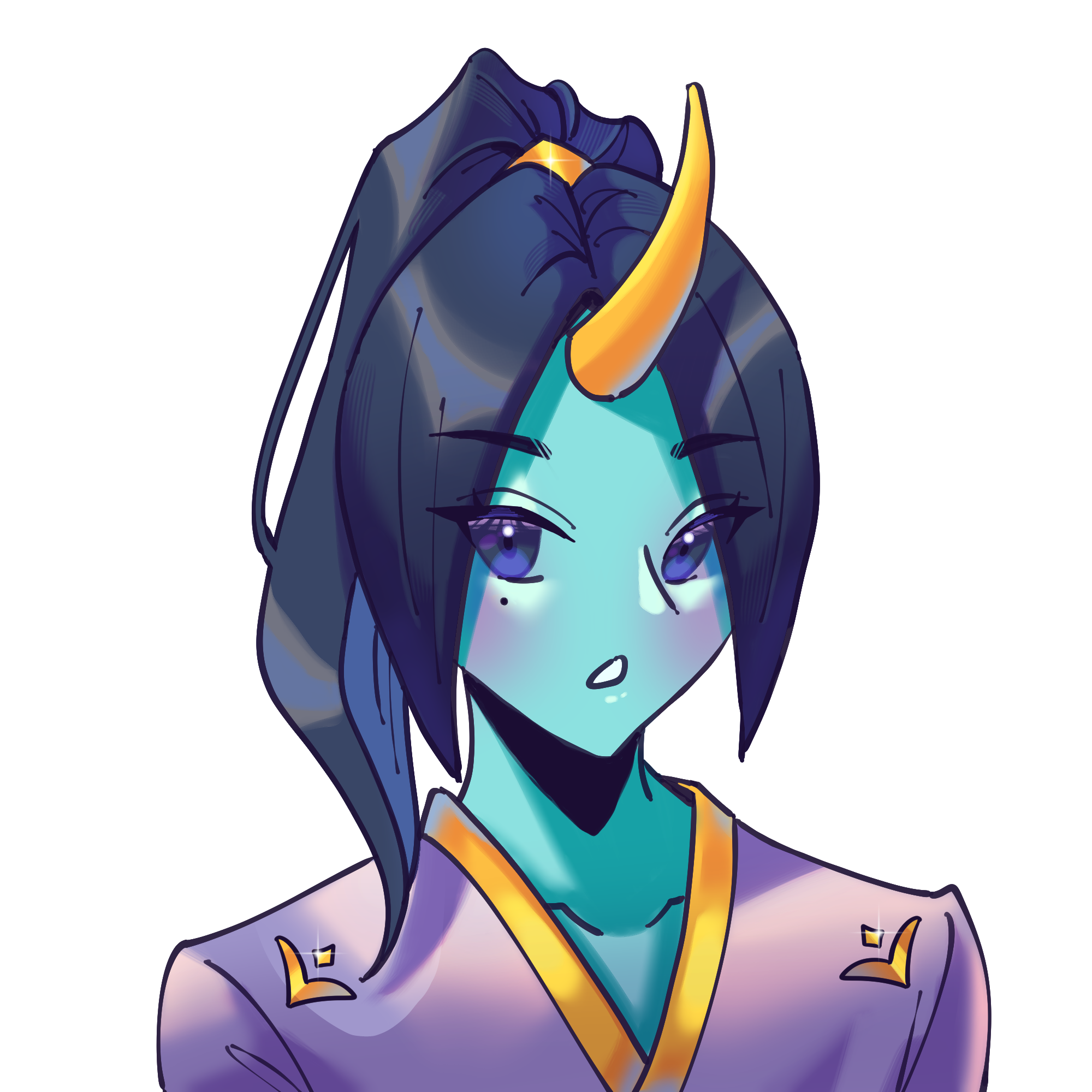 The Artist is a reserved calligrapher with a specialization in elegantly assassinating targets with their digital tablet and pen. Their gameplan revolves around cycling between their deadly skills, which all have cooldowns that reset upon enough turns passing. Using the skill Eyedrop, The Artist can cleanse allies of status effects and convert them into Arts. Each status effect represents a different Art, which applies a passive buff to The Artist until expended. They may convert their current Art into resources for themselves or others, in case extra utility is needed. They can also Topple enemies inflicted by status effects with Lasso to knock them down and inflict massive damage!

Their special ability is called Broad Stroke. When the Palette has an Art on it, The Artist may sacrifice their Art in order to perform a punishing strike. Every Art has a different effect when used with Broad Stroke, so don't be afraid to get creative! 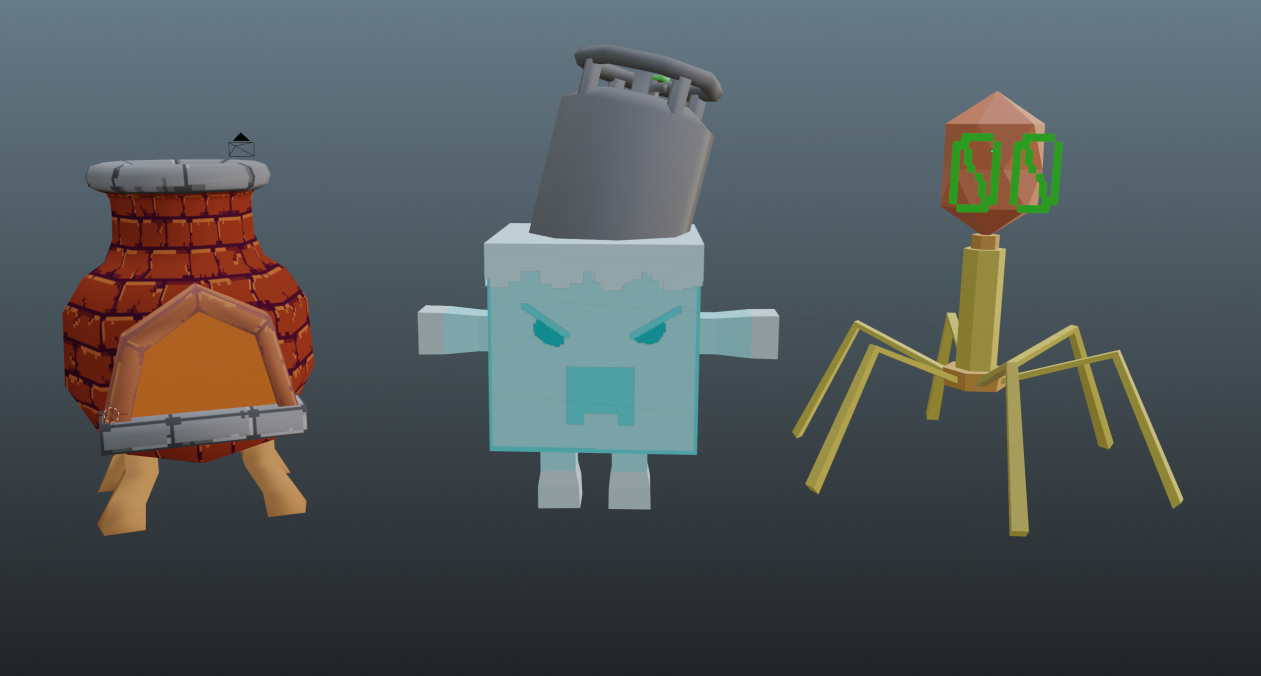 The Nightmares are creatures that have risen from the collective unconscious fears of the dreamers! Each of The Nightmares obtains a special power-up if they are inflicted with a Status Effect that matches their Elemental Aspect. Beware! 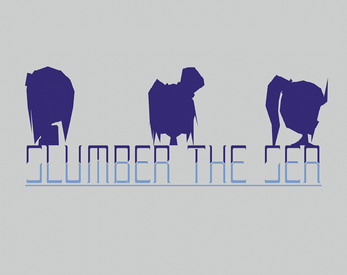